Click on the menu categories right below for more forms!

Cost Of Work Addendums for T & M and Cost Plus Work

Scroll Down for SAMPLES!

Lien waivers or lien release forms are required, in some states, to be given after and sometimes before a progress payment is made to the roofing contractor. Exactly what is included in a lien waiver/release is codified into law by many states.

Even if not required by state law, most commercial customers, for their protection, will ask for a lien release before making a progress or final payment.  Also, roofing jobs with a funding control such as a construction lender or jobs where the work is paid from insurance proceeds, will require these forms be given. And if you pick up the latest copy of AARP or some other magazine, it is hard not to find an article about contracting for any type improvement work, roofing included, on your home, that does not recommend getting lien releases when making any progress or final payment on the work.

A recurring nightmare every contractor has had at one time or another is, during a time when bank accounts are low, having to depend on receiving a check to make payroll. If that happens, an even worse scenario is going to pick up that check on a Friday morning and being told your payment is delayed until you submit a statutory lien waiver... a form which you don't have, and which nobody local seems to carry.  Every roofing contractor should have all statutory lien waiver, lien release forms available for when this situation happens. Having these required forms is just good sense.

Completion Certificates are also important because a completion certificate serves to set a point in time, or memorializes, when the interested parties on your roofing project have looked at and acknowledged satisfaction with the roofing work.  This is important both from a legal perspective and from the "psychological" standpoint of the customer. A customer who agrees they are satisfied, by signing a completion certificate, is not likely to, at a later date say... "well the job was never really done right but we paid because the contractor pressured us"... which, during any future dispute that we hope doesn't happen but could, is often given as a reason to explain why the customer paid the roofer even though they were supposedly unhappy with the work done.

There are basically 5 different types of lien waivers...

ACT Contractors Forms Software for Roofing Contractors includes all 6 lien waiver/release forms and completion certificates so when you are asked for these, payments to you will never be delayed while you try and find one.

ACT CONTRACTORS FORMS OFFERS THE FOLLOWING 6 ROOFING PROJECT LIEN WAIVER AND RELEASE FORMS AND COMPLETION CERTIFICATE FORMS FOR ROOFING CONTRACTORS The forms below are included in the full version of ACT Contractors Forms Software and most are also available as fillable pdf forms and as printed multi-part paper forms. 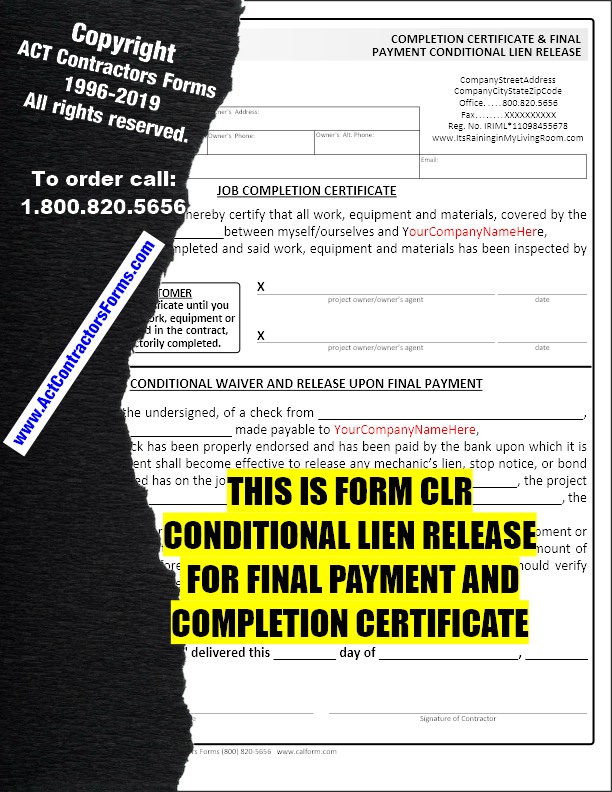 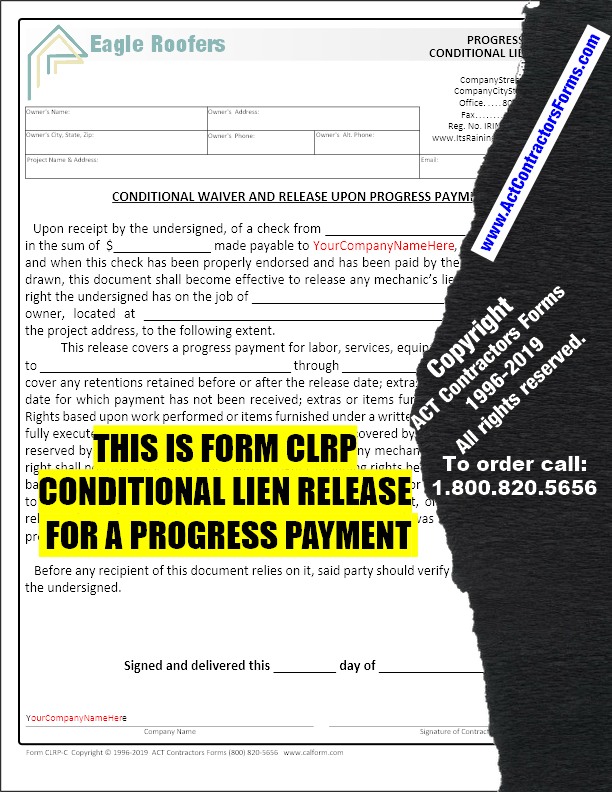 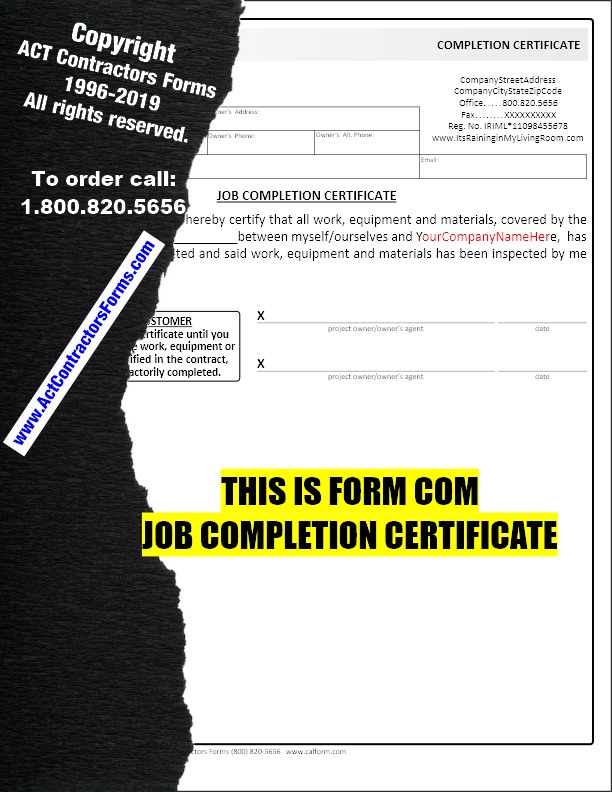 DOCUMENT THE CUSTOMER ACKNOWLEDGMENT THE ROOFING WORK WAS SATISFACTORY 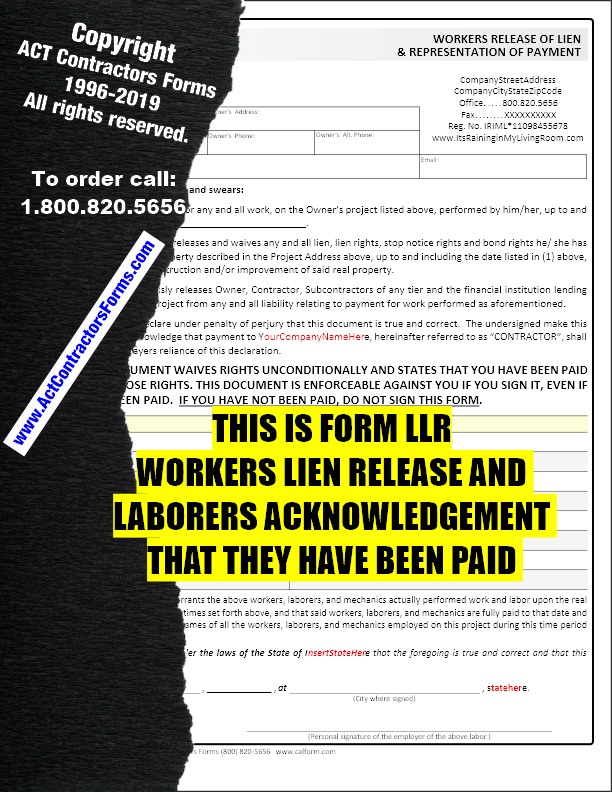 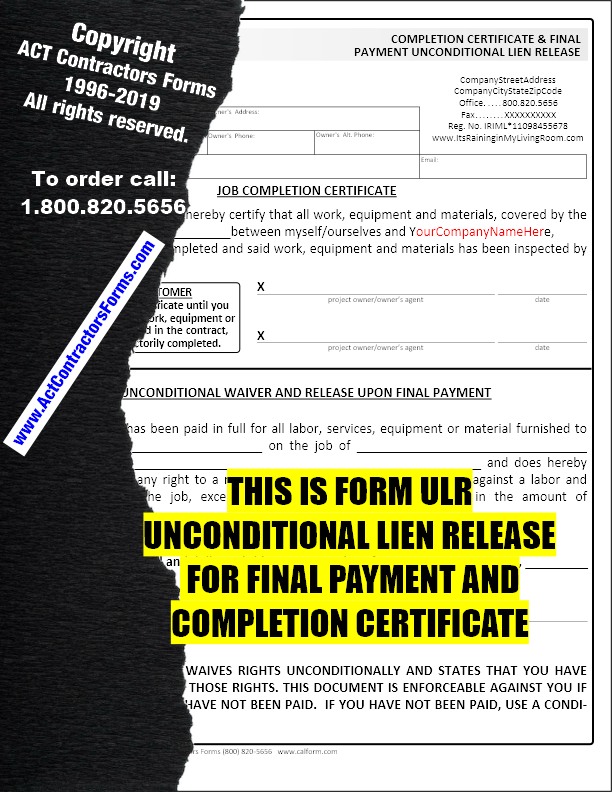 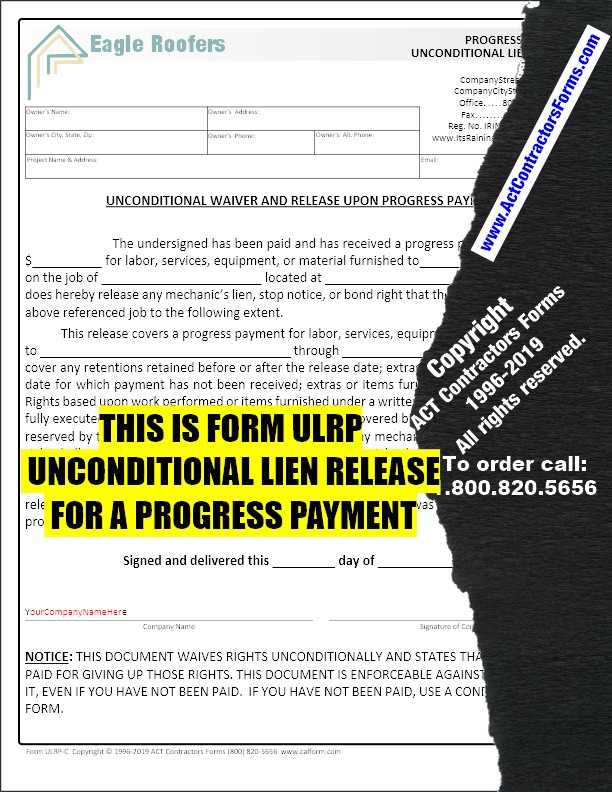 Click on the THUMBNAILS right above to see a LARGER Sample.

We don't "hide" from you, behind our website! Give us a call, we answer our phones and your questions!