ACT Contractors Forms... From The Paper Side of Contracting.

Contractor Form: The California Mechanics Lien II... What is Required

Putting the pieces together...

What is a California Mechanics Lien?

The Mechanic's Lien is a NOTICE of a charge, hold, claim, or encumbrance upon property. The term implies the right which California law gives to have a debt satisfied out of the property. The California State Constitution provides Mechanic's Lien law to help assure that a mechanic gets paid for labor and/or materials supplied to erect, repair or otherwise improve the property of another. A mechanic, for contractors purposes, is anyone (individual, company or corporation), other than the property owner themselves, who supplies materials or who furnishes labor to improve real property.

When a mechanic's lien is "perfected", the lien claimant has taken his case to court and received a judgment. The lien claimant then has the right to foreclose on the property and to use the proceeds to satisfy the judgment... taking into account that "others" with a higher position on the property title, like the first or second mortgage holders (if any), must be paid first.

Realistically, mechanic's lien judgements rarely result in foreclosure. The judgement creditor is usually very enthusiastic about paying the judgement long before it goes that far.

Requirements you MUST meet BEFORE you can place or File a California Mechanics Lien.

In the next part of this series of articles on the California Mechanics Lien Process we will discuss the all important California Preliminary Notice IN DEPTH!

Do you have questions or can you share your own experiences with the California Mechanics Lien process? Please comment below.

California Contractors forms must not show "bonded" and/or "insured"! 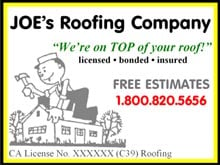 I received a bid for a new roof on my house last week here in California.  At the top of his roofing bid form and at the bottom of the advertisement from him that I responded to, this very large roofing contractor proudly displayed "bonded and insured".

Behold... two common mistakes have just been made that we find regularly from California Contractors who purchase our contractors forms.

MISTAKE NUMBER ONE- ADVERTISING YOU ARE BONDED!

California Contractors Law (section 7027.4 of the CA B&P) prohibits including any reference to the contractor being "bonded" in any advertisement, or on any company "paperwork" that could reasonable be considered "advertising", if the bond being refered to is the standard license bond that all California Licensed Contractors must have. Simply stated, unless you have a "special" bond other that the license bond, you are not allowed to mention that you are bonded!

Contractor bid forms or estimate forms, proposals, bid proposals, door hangers, letterheads and most of the other paperwork CA contractors use between themselves and their customers might well be considered an "advertisement" in many cases so it is best to leave the word "bonded" off these as well.

A CSLB disciplinary bond is not a "special" bond!

If you are required to carry a bond, in addition to the standard license bond, as a result of a CSLB disciplinary action against you, the same section of CA Contractors Law also prohibits you from advertising this bond! You have to wonder why any contractor would WANT to tell people about their disciplinary bond, you know the one they got from doing something WRONG, but apparently some do.

A few years ago, California added to the law, (section 7027.4) that has been in place for years, making the word "bonded" a no-no in advertising. These "new" laws state a CA licensed contractor can no longer advertise that they are "insured" unless they state what type of insurance it is!

So, any reference to "insured" in your company ads and forms must, for example, be stated as "commercial general liability insurance" or "worker's compensation insurance" or better yet "We carry Commercial General Liability and Worker's Compensation Insurance for your protection!"

Silly mistakes like this can get you into trouble with CSLB and if included on your California contractors forms, can interfere with your legal rights as a contractor!