ACT Contractors Forms... From The Paper Side of Contracting.

Senate Bill 189 (Sections 8000 to 9566 of the California Civil Code) went into effect July 1, 2012.  This bill mandates many important changes in California construction law. SB 189 reorganizes (puts all the provisions scattered about the CA Civil Code together) and attempts to  "simplify" those provisions in the California Civil Code that deal with construction claims and their legal remedies (such as the mechanics lien and stop notice and related forms). All of our forms have been re-written to comply with these changes and have been since June 1, 2012! Throw out your old forms... do not jeopardize your rights to collect what is owed you by using up those out of compliance forms!

You can purchase these new forms individually as fillable PDF forms or as part of any version of ACT Contractors Forms on Disk for California Contractors. Call us to order the new forms... or if you have questions!

The following forms have been changed and the old versions should no longer be used: 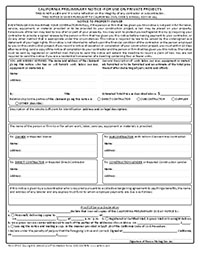 Effective July 1, 2012, California has a new Preliminary Notice form titled “California Preliminary Notice” (the old title “Preliminary 20-Day Notice” has been replaced).  As always, we like to stay ahead of the “game” and have had these revised forms available since May of 2012! If you need to update just give us a call.

The usage, timeline, and basic procedures associated with the CA Preliminary Notice remains the same. The preferred way to give this notice is still by certified US Mail, WITH return receipt service.  You still give this notice to ALL interested parties like… the property owner, any subcontractor of a higher tier (the subcontractor that you are contracting with on the project making you a sub-subcontractor), to the Direct Contractor, as well as to any construction lender.

In the past, subcontractors have been at the mercy of the Direct Contractor on the project to supply them with the names and addresses of the property owner and any construction lender.  The new Section 8208 of the CA Civil Code now requires the direct contractor to supply to “any person seeking to give preliminary notice” both the name and address of the property owner as well as any construction lender. Section 8210 of the CA Civil Code also requires the property owner to supply the names and addresses of any construction lenders, for loans obtained after commencement of the work, to anyone who has given preliminary notice. As we have always recommended, and that has been included is Section 8214 of the CA Civil Code, any server of a preliminary notice can and should file the preliminary notice with the county recorder… especially if large sums of money are involved! When this is done, the County Recorder will make a “good faith” effort to notify them of a Notice of Completion or Notice of Cessation that is filed on the project. Remember, the timeline for filing a mechanics lien is shortened on any project when either a Notice of Completion or Notice of Cessation is filed!

Be aware that section 8216 of the CA Civil Code REQUIRES every subcontractor on the project to give the California Preliminary Notice for any work over $400 in value!  Failure to do so is grounds for disciplinary action from the CSLB!